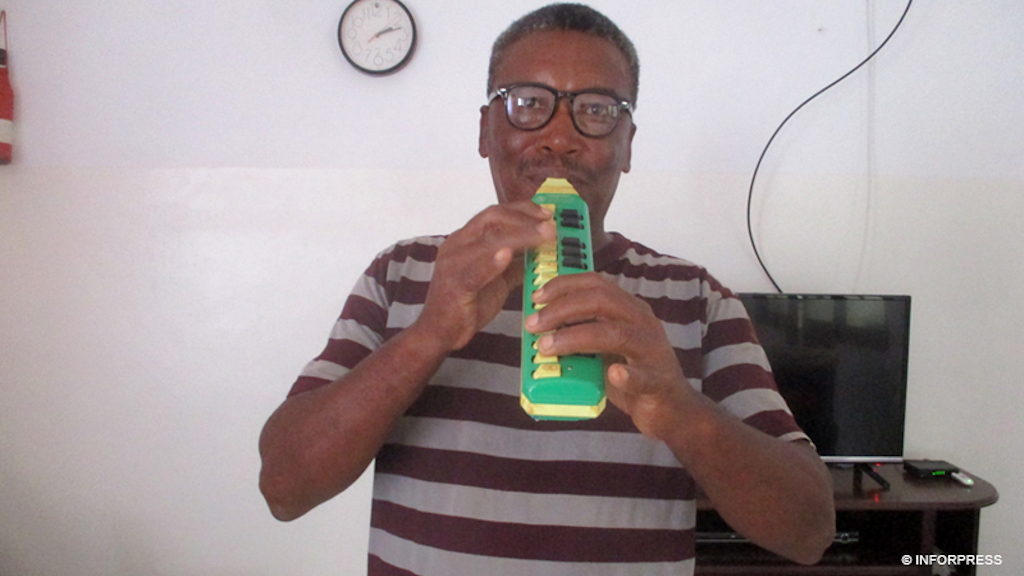 Rafael Silva Monteiro is a multi-instrumentalist and self-taught, with a preference for the melodic soprano harmonica, who has already played and enchanted the Mayans of all the towns on the island and wants to pass on his knowledge to the young.

In conversation with Inforpress, the bricklayer by profession started by explaining his incursion in music, at the time at the age of 16, and, according to him, it was thanks to two friends who lived in Cascabulho who taught him to make the first chords in the ukulele.

“At the time, I started doing some chords in the cavaquinho with Palmerino and João de Deus, but as I didn’t have an instrument I didn’t advance. After a while I had a new opportunity, this time with Paulo de Faustina, a childhood friend, and together we started taking the first steps, but he was already playing in the dance halls, accompanying Codé in several villages ”, he said.

Rafael Monteiro began to stand out in the cavaquinho, which allowed him to join the colleagues with whom he learned, having participated in the “rabecada” dances, which took place at the time a little throughout all the locations of the island of Maio in moments of religious parties, weddings or weekends.

Over time, the artist “accidentally” began to like wind instruments, more specifically the melodic soprano harmonic.

“One fine day, I passed my girlfriend’s house at the time, and my current wife, I felt the children playing on that instrument that had been brought from Europe by their father, so I liked it, and said to myself if I ever had it I’ll touch it in my hand ”, he reported.

Something that happened some time later, but for a few minutes, enough to be able to make some notes, he stressed, noting that this was thanks to the knowledge he had already acquired in the ukulele.

The wind instrument came in handy when he was already married, because it was offered to his son as a gift and, as a self-taught man, he taught himself to take the first steps.

“When I picked it up again, I started experimenting with making more notes and after a week I went to rehearse in Morrinho’s chapel and everyone was amazed at how I managed to learn to play the melody. From then on I started to play in all the masses of the big parties and more and more people were becoming enchanted with me, because of this instrument ”, he emphasized.

As a self-taught person, Rafael Monteiro also learned to play ten-string guitar, an instrument he found at home. In addition, he also started to pursue the guitar, keyboard, violin and, but recently, the bass guitar, in the group “the brothers”, which he helped to create together with his brothers and a cousin, but stressed that he never left aside the his instrument of choice, which earned him many invitations and words of praise.

For being a wind man, an instrument that is rarely played in Maio, Rafael Monteiro said he admired the only clarinet player on the island, at the time resident in the then village of Calheta, and because he liked this instrument he had a surprise.

That multi-instrumentalist said, “the day after the mass, Mr. Torin, who was an emigrant, came to me and greeted me and came back to me and said, why don’t you play the clarinet and I answered, I would like to, but I have no way buy and he promised to bring me one ”.

Something that happened years later, but, as he explained, the most difficult thing was to remove the first “pin”, since there was no one to teach him. But, from the moment he succeeded, he no longer wanted to stop and guaranteed that every time he plays this instrument, whether at mass, ball or show, it is a matter of admiration.

Rafael Monteiro also pointed out that today he has the late Luís Morais as his “teacher”, and that every day he is discovering new things, but he took the opportunity to reveal his grief at the fact that, according to him, the Mayan artists are not valued on the island.

The multi-instrumentalist concludes by stating that he is willing to pass on his knowledge to the youngest, within his technical capacities, since he never attended a music school.